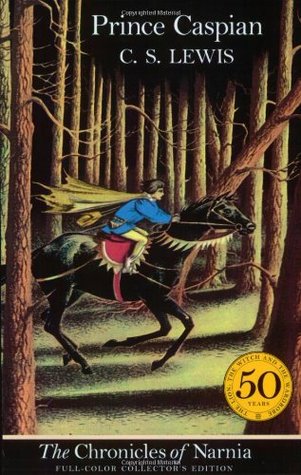 I am already on the fourth book in the series. This is not going as fast as I had thought it would, but I’m enjoying the experience anyway. This was definitely a hard read for me, as the movie adaptation was my favourite in all of the movie in the series, so having to read the book again after so many years and only having the movie as a reminder of the story is definitely an added challenge. Nevertheless, I finished it and surprisingly it didn’t struck me as much as the movie.

As with the other Narnia books that I’ve read, I am always captivated by Lewis’ way of telling stories and how well he would describe everything that is going on, or the surrounding, or even the foods that were present in the story. This was actually where the book is better than the movie, because it fill a lot of gaps that were not addressed in the movie, such as how the Pevensie children struggles with food and how it was difficult to reach Caspian. In the movie it seems like there was no such thing as food issues.

Having said that, I still think that the movie did a good job (if not better) at adapting the book, as the movie was better at building the bridge leading to the fight between the Telmarines and the Old Narnia; especially by incorporating the struggle that Peter go through having seen that Narnia and Cair Paravel was in ruin when they left Narnia a year ago. Should the movie adaptation stick truthfully with how the book goes, it would have struggled even more as the conflict build up was not strong enough, especially since half of the book just revolves around the Pevensie children and Trumpkin trying to get to Aslan’s How.

Character wise, Caspian felt a bit too two-dimensional in the book, granted that knowing he grew up without a Father and suddenly was thrown into a battle for his life and a throne that was rightfully his might be too much for anyone, but I just felt like Caspian was a bit too stale. But, I was definitely glad that movie Edmund was better portrayed compare to book Edmund (but then again, I might be bias with this remark). I love the fact that Edmund took Susan’s side as Lucy took a stab at Susan, even though I believe that Edmund was very close to Lucy, he still manage to be Just (true to his name). Aslan’s compliment to Edmund was also a nice touch as I feel that Edmund now gets to proof that he had learnt from his mistake.

What’s important for me in this book was how Lucy’s concern about how what if man back in their world would go wild inside but still look like regular men and there’s no way to know which were which. This concern resonates really well, especially these days when you look at the news. This was very important for me, because I hope that many people are still reading this book and stumble upon this part and starts to think about how wild and crazy men have become in modern times, and maybe when more people realise that, we could all try to overcome it (a bit too optimistic, aren’t I?)

Now, don’t get me wrong, I love the book but I have to say that I like the movie better. As I mentioned before, the movie did the conflict building better than the book, and what I like the most was the fact that Susan was given a more active role in the movie compared to the book, in the sense that she was given a chance to fight alongside the others, but of course it can only happen like that in the movie because the movie adaptation incorporate the attack on Miraz’s kingdom while there was no such thing as that in the book.