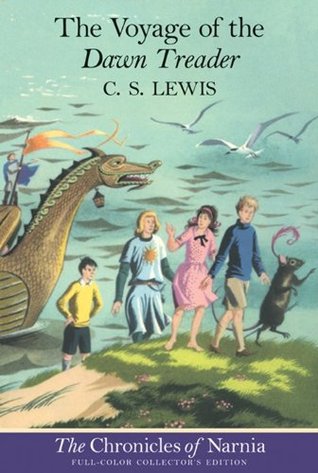 And what do we have here? I am already on the fifth book in the series. As much as I am glad that I will soon finish the series, I can’t help but feel a bit sad and depressed that I will soon bid farewell (again) to this beautiful series. Anyway, I can’t wait to read this book as many have said that the movie adaptation was such a disappointing thing, so I would like to see how much does it differ from the book (again, the last time I read this book was years ago and it was in Bahasa, surely it would be a much different experience to read it again in English).

The book and the movie were definitely different, it’s almost like the movie took its own course compared to the book. I do admit that, although the basic premise which is to search the seven Lords is still the same, the details were entirely different. But, if I must be honest, I have to say that I think despite everything, the movie did a good job, as the adventures were more structured compared to the book.

Let me explain it in ways that would not bore anybody. When I read the adventures that the crew of the Dawn Treader experience in the book, it felt like it was just a series of random adventures with no silver lining (which I presume the whole purpose of the adventure was to find of what had happened to the seven Lords); in the movie, they made the series of adventures more structured and to achieve that, there must have been some change so as to accommodate the structures of the adventures that occurred.

The fact that the movie chose to have Eustace to participate in the defeating of the Sea Serpent was much appreciated, where it was not like that in the book. Speaking of Eustace, I have to say that the most annoying thing in the movie was that it did not include the moment where Edmund told Eustace of how Edmund had behaved when he first came to Narnia. I think it was one of the most important part in the book as it would redeemed both Edmund and Eustace a lot, with Edmund having to share his past with Eustace who have been nothing but a sour puss the whole ride.

In relation to Edmund, many have said that they were disappointed with movie Edmund as it seems that he had a major setbacks from what he had achieved in movie Prince Caspian, but when I read book Edmund in VoDT, I would say that movie Edmund was better. Now, let me elaborate on my reasoning. Movie Edmund had a large and more active role throughout the adventure compared to book Edmund. He was more proactive in the course of the adventure, and the fact that the Sea Serpent emerge because he had imagined it seems more befitting than having a Sea Serpent that just emerge out of nowhere and not a major fight was to be put to defeat it, which is what actually happened in the book.

As much as the movie VoDT was not an exciting movie in the series, I (sadly) have to say that the book was not better. Even book Caspian was very disappointing, the fact that he as a King almost willingly to leave his subject to go to Aslan’s country (for f sake, the others almost willing to tie him up until he had come to his senses), while movie Caspian came to the realisation of his duty as a King to his kingdom on his own was definitely a nice touch and shows how much he had grown since his coronation as the King of Narnia.

All that aside, the book was still a fun read, what with the discoveries of the many islands that were not yet discovered during the Pevensie children’s reign of Narnia. Now, I very much am looking forward to the last two book. I hope that this will be an even stronger book, so that I could have a nice closure with this book (I actually had never read the last two books, not even in my own mother tongue, so this would be a fresh new experience for me.)