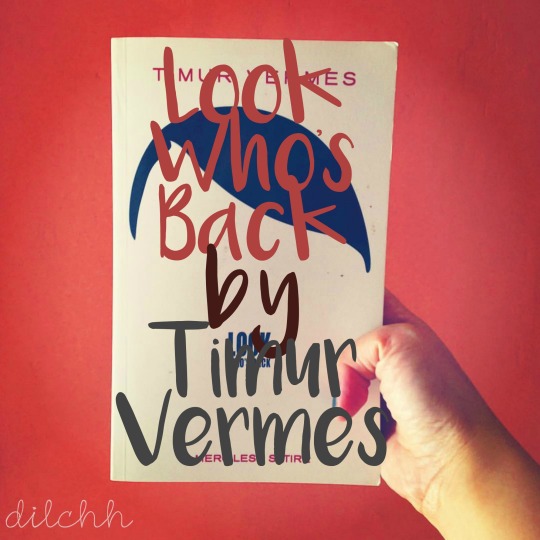 The sensibilities of young people are unadulterated. For them there is no good or bad, they merely think instinctively. If a child is raised correctly, he will never come to make a bad decision.

Hitler woke up in the Summer of 2011 in Berlin. What had happened? To say that he was shocked was an understatement, but he was quick to bounce back in following his previous mission. He became famous after people took him for someone who looks way too much like Hitler and never once did he break his character. What would Hitler do in this modern German, where a woman is running the country? How would the modern people of German react to the new Hitler?

While it can get boring reading Herr Hitler complained or went into orator-mode about his plan for Germany (this, I presume, was due to the fact that I didn’t read it on its original language), it was very insightful to see how Herr Hitler was analysing the use and power of mass media, especially the much more mainstream one. So, do not be tempted to give up on this book, because in the end it was very thought-provoking, albeit a bit repetitive when it comes to Herr Hitler‘s view on what Germany should be like according to him (this, I presume also, was due to my lack of knowledge about Germany’s politics).

I sure was not alive when Hitler himself was roaming around, but from the several footages I’ve seen of the man himself and some actors’ interpretation of him, I do think that the author had done a marvelous job in bringing Hitler back to life through this book. You get to see the Hitler that is so passionate about the purity of German, his contempt for immigrants, but you also see the Hitler that cares so much for his health and his melancholy side of wanting a family but realise that in order to serve the Fatherland, one must forego family (well, at least that’s how Hitler seems to view it). It is also interesting to see Hitler tries to make do about the modern life, with Starbucks, the Oktoberfest, and also YouTube (or U-tube according to Herr Hitler).

I have to say that this book confuses me (more than the fact that I have zero knowledge about Germany’s politic) because it goes and goes and you don’t know where the story is actually going. And then when it starts to get interesting, BOOM, the book ends. Not that I’m complaining, because if I’m being honest, I don’t think that there could be a better ending than how the book had ended, I just wished that I hadn’t struggle my way with this book only to get interested with the book and it suddenly ends like that. But, hey, you can’t always get what you want.

As I’ve mentioned before, the story goes and goes in a very slow pace. I kept on thinking where is the story going. I was already bored because most of the time I understand nothing of what Hitler was ranting about (again, mostly he was ranting about something that has to do with Germany’s politic of which I have absolutely no knowledge about), and the slow-paced story really did nothing to help. But then, the last four chapters, several things start to happen, and I was left wondering will the book manage to cover all these events before the book ends. And the book did ends, while it did manage to cover some of the basic of the events that had happened, I feel like it wasn’t told very clearly. I feel like the author waste too much of his pages explaining about Germany’s politic through the rants of Herr Hitler (on hindsight, this made more sense, because this book was meant as a satire jab exclusively happening in Germany).

Apart from the magnificent creation of Herr Hitler, the other character were incredibly boring, if not ridiculous and frivolous in the first place. You would think having half (if not all) of the main characters, apart from Hitler himself, being people working in the TV industry, the characters would have been more interesting, but nope, they were as bland as salt-less diet. I guess the author was investing too much on Hitler that he might have overlooked the rest of the characters, except for the newspaper seller man, who seems to be quite interesting.

If you ever plan to read a translated book, do try to do a bit of research on anything local about where the book originally from, so as not to get confused and bored because you can’t understand anything that the book was referring to. But, that aside, I think this book was very interesting for me because it poke a lot on the role and the power of mainstream media on our daily life, how it can manipulate what should be considered as important or not. How it manipulates something important into what seems to be as trivial as a comedy show. Mainstream media, especially with the rise of internet these days, is actually a scary place to be. Literally anyone can give something out into the public that will be shaped in so many ways into something else, having the power in telling the masses whether or not a certain issues are worth mentioning or thought about. This book gives you a glimpse of how powerful and scary media is.

Totally would recommend to people with a vast interest in Germany’s politics. I would also recommend those who are actually pursuing study in Communication Studies to give this book a try, although I would like to remind you that you would need to give yourself a crash course first on Germany’s histories and politics (I can’t stress it enough how important that bit of knowledge would be when you do decide to pick this book up). Word of advice, look for popular references noted by Hitler and tell me if you didn’t find it funny (because that is very funny how Hitler was making oblivious observation on Starbucks and The Beatles’ song Hey Jude, to name a few).

1 thought on “Book review: Look Who’s Back, by Timur Vermes”