Title: The End of the Day

Charlie meets everyone – but only once.
You might meet him in a hospital, in a warzone, or at the scene of traffic accident.
Then again, you might meet him at the North Pole – he gets everywhere, our Charlie.
Would you shake him by the hand, take the gift he offers, or would you pay no attention to the words he says?
Sometimes he is sent as a courtesy, sometimes as a warning. He never knows which.

Honestly it’s a sad feeling for me to admit that I didn’t quite like this book, because I do adore Claire North and her books. I’ve read three of her books under, The First Fifteen Lives of Harry August, Touch, and The Sudden Appearance of Hope, and I am completely fascinated by the first two. I didn’t quite enjoy The Sudden Appearance of Hope, but I liked it nonetheless, although not as much as the first two. That being said, when I first saw this book, I was beyond excited to read it. I love the unique and quirkiness of Claire North’s plots and characters, and I really can’t wait to meet Charlie, the Harbinger of Death.

Honestly, I’ve never consider any books from Claire North are easy to read; there’s always that one obscure thing that would took about a couple of chapters in for you to get the hang of the story. Now, with this book, I halfway through the book and I still couldn’t get the hang of it. The jumping from one story to the next, the snippets of (what I assume)people’s comments on today’s condition, and down to the conversation between the characters are so hard to get a hold of. I spent the better part of reading this book just being confused. I was confused about the story, about the conversation, about the plot, and even about the characters. I was once even tempted to just abandon the book altogether. But I persevere because I wanted to like this book, I wanted so much to understand the book before I gave it all up together.

And yet, even until I got to page 300 something (leaving me with 100-ish more pages before the book ends), I still couldn’t get a hold of the story. I mean, I get the gist of it. It’s about death. It’s about what is death and why death. I mean, I hope I understood the big plot correctly, because even as I finished the book, I still couldn’t understand the story. There were so many characters that I for sure thought would have played an important role into Charlie’s story, and it never did. Boy, I was just so confused about everything. There was this particular part in the story where I was sure would be the catalyst into the whole entire story, and yet, it didn’t quite open up into something, and BAM, the book ends.

But, do not get me wrong. Although I might not understand the story correctly, I did not hate the book. If anything, as per usual, the characters, the conversation, Charlie’s adventures and the people that he met  just made me fell in love with the book. Here’s what I got from the book; death is something that we know like the back of our hands and yet be it our of fear and confusion, we refuse to know or understood death. And yet, death doesn’t always mean a man leaving this earth, but change is also death. That any number of changes in one’s life means is death to something that is no longer there, maybe it’s your way of life, your way of seeing and understanding things. If my understanding of this book is correct, or at least came close, then I really do like this book then, because really death couldn’t possibly that scary when it is one of the first few things we knew from when we were born.

I really want to recommend this, because death always fascinates me and obviously I’m already bias about this book. But then again, maybe the plot and how the story unfolds wouldn’t be everyone’s cup of tea. So, read at your own risk, I suppose? 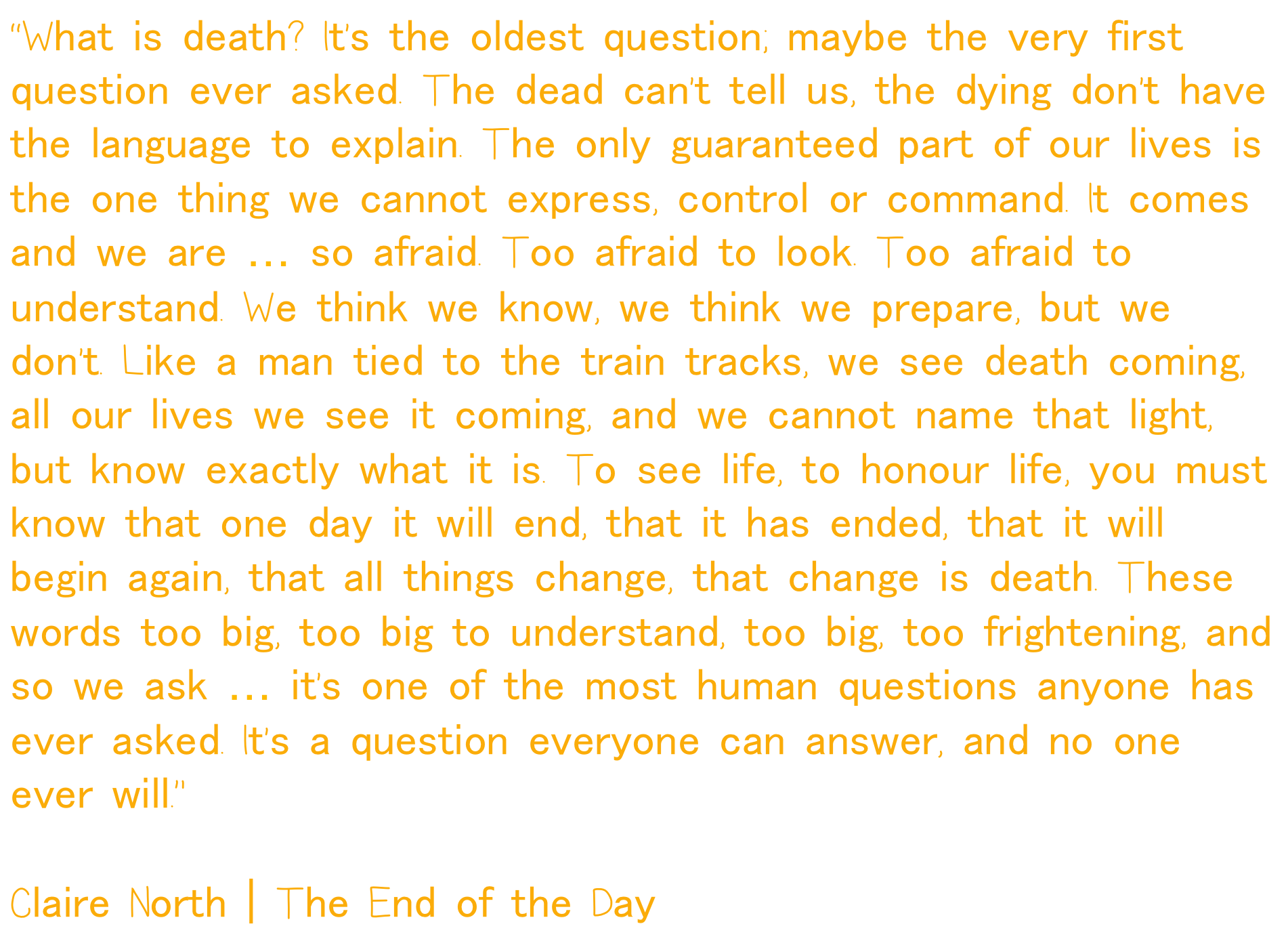